GALICIA FIDDLE is a NON PROFIT CULTURAL ASSOCIATION,
with the goal of encourage the playing of string instruments
in an alternative way. 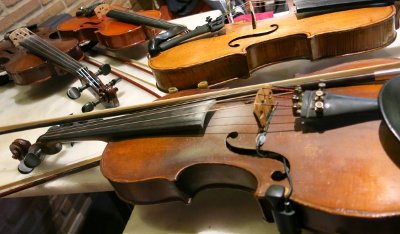 Fiddle is the name used internationally to define the violin used to interpret root music: traditional, bluegrass, folk, celtic, gypsy, etc. Although it is the same instrument, the peculiar way of interpreting the popular music of each territory distinguishes it from the violin commonly used to interpret "cultured" music and that is why in countries where violin has a strong roots in tradition: Ireland, Norway, Canada, etc. use both words to differentiate one type of interpreter from another.

Everybody knows this example: "The fiddler on the roof" has been translated into Spanish as "the violinist on the roof", when in fact It is about a popular music musician and for that reason in the original title they use fiddle and not violin.

Easier than it seems

Nowadays, dozens of new violinists are getting into the traditional music scene, and not because they spent ten years studying at a conservatory, it's just that they found out that fiddle is a very accessible instrument for those who have minimal hearing qualities and rhythm

This instrument not only serves to play the melody, but its role as an accompanying instrument is very important, creating harmony or simply pacing. And in this is what is based on the teaching we believe in Galicia Fiddle, to make more and more people of all ages go to the street with their violins, or to play at parties and pubs the melodies they have learned in the classroom or just to accompany those that are either interpreted too fast or unknown.

One of the first things that fiddle students learn is to make only two chords and a series of rhythms that will apply to the different dances interpreted by the most advanced students. In this way they can be incorporated into an instrumental ensemble in which their role is as simple as important, as it provides the melody with a rhythm without which it would be difficult to dance. 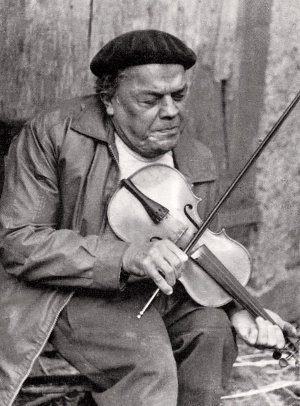 A bit of recent history

For a few years now, we've been seeing how the traditional and folk violin was slowly joining the music scene. Increasingly, you can see more groups that incorporate the violin within their band: Sueño de Morfeo, Mago de Oz, Insite, etc.

For centuries, Galicia had an important violinistic tradition based on blind singers of folk songs, who with their violin accompanied the story of the most bloody news, as they made dance to a whole village. With the creation of the ONCE (Foundation for Cooperation and the Social Inclusion that has built up a system of social benefits for the blind and visually impaired), this office was slowly disappearing and the tradition of the popular violin with it. Fortunately, several audio and video recordings of the last traditional violinist "Florencio dos Vilares", kept for the posterity.

Just when the last example of tradition was disappearing, a new musical style that will bring rural music to the cities emerges in Galicia: folk music.

In the eighties, a handful of violinists who, integrated into different groups, get the violin to be present in our music appear. With the exception of the Pancho Álvarez's album dedicated to "Florencio dos Vilares", nothing of special relevance will take place in the last decade of the twentieth century.

The rebirth of the twentieth century

With the arrival of Sondeseu in 2001 we can hear for the first time several folk violinists playing together. This is possible thanks to the big bet that Vigo City Council makes through its conservatory of traditional music, where first Quim Farinha (Berrogüetto) and later Alfonso Franco began to teach, for the first time in the whole peninsula, folk violin classes.

In the last 10 years, the activity related to the folk violin is growing exponentially in Galicia: Begoña Riobó has published its first homonymous album; in "A Central Folque" School of Santiago de Compostela, Gutier Álvarez began teaching classes, Tonecho Castelo in A Coruña and the "Florencio Project" in Lugo, directed by Germán Díaz, pays tribute to the "Cego da Fontaneira".

In Vigo, a group of professors and students from ETRAD, managed by self-management organizased during the last years, a series of specialized violin courses with some of the best fiddlers in the world: among them Jany Lang (Hungary) , Laura Cortese (Boston, USA), Bruce McGregor (Scotland) or Scott Hartley (UK). This come and go from great teachers causes that the number of violinists attracted by the alternative styles is increasing.

The initiative of this group of fiddlers, associated under the name of "GALICIA FIDDLE Cultural Association", also maintains an excellent relationship with both of the most renowned alternative violinists in Spain: Diego Galaz and Oriol Saña, from Barcelona, and they are designing (after his passage through Galician lands) a state level circuit with whom that will allow them in the coming years to continue bringing teachers of such a high level despite the difficult situation that the world of education and culture is going through.